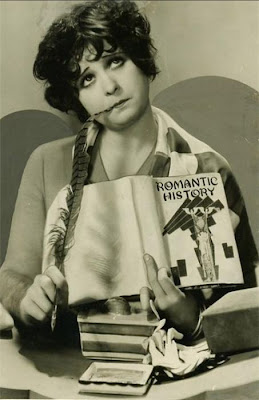 Snobbishness comes in many guises. Some deluded types get a bit twisted about number twelve lowering the tone of the entire neighbourood while others would rather die than shop at Asda. Some people can only tolerate organic this and soil covered that, while others (naming no names) rather believe it is both a sign of low intelligence and dubious social class to enjoy Coronation Street with the same degree of enthusiam they should reserve for the maudlin best of high brow French Cinema.

Me I’m a book snob. While I would like to say this implies I only read the most challenging of intellectual tomes, what it actually means is that I have recently discovered myself to be deeply intolerant of almost anything other than the kind of books Persephone would be happy to feature on their darling list of womens domestic literature. When all is said and done the term “snobby” is after all but a by-word for failing to tolerate that which we consider inferior, and in my silly, insular little world any book that does not feature a strong female character in a domestic situation to which I can relate (whether she be living in a lighthouse or lounging by a pool), is quickly given short shrift. Which until now has not been a problem. Nobody challenged me and I was content on my little domestic bubble, never giving a thought to books written about great big mean issues like politics and terrorism and the random thoughts that pop out of mens brains about nothing in particular.

And then I joined a book club and a gang of likely ladies burst my bubble with literary preferences of their own and a whole lot of wine (and the odd carrot cake) and now my relationship with reading has gone a bit skewiff and I feel rather perplexed about the whole matter, not to mention the fact that I am having to deal with the fact that I clearly LOVE the sound of my own voice way more than I should and feel like sticking my fingers in my ears when anybody dares to offer an opinion that hurts my head. (I can’t hear you: I’ve got beans in my ears. Beans in my ears!)

I have a number of complaints about the whole Book Club business.

1) While life is stuffed with books I am aching to read, in a fit of the urge to be social, I force myself to endure books I wouldn’t dream of reading in a month of Sundays and feel deeply resentful on a daily basis that my horizons should be so painfully expanded.

2) When I have read a book, I wallow in my own experiences of it, certain of my opinion and happy to move on and have a little dally in another world altogether, but oh no. Not now. Now I have to form an opinion I am capable of articulating, and worse than that it is entirely possible that the whole room will have an opinion different to mine and I will then find myself arguing about a book I didn’t care about in the first place. Or, and woe is me, someone will start waffling on about a book I loved and have noticed something I failed to see and before I know it I have inwardly declared myself an imbecile and will thereafter doubt my own experience of every book I ever read again. Or I will make an absolute downright show of myself by declaring that in my warped little mind Heathcliff looks like Cain Dingle out of Emmerdale and the whole room will laugh and I will no longer trust my minds eye to conjure up a vision of a character again.

3) It turns out I like arguing more than I should. In fact the whole matter only serves to highlight my lack of social skills. I laugh a lot. Out loud. In civilised company. Sometimes at people. And I must confess, never mind the ludicrous, often outrageous things I say just because I’m bored, in my my head I am busy calling women I like perfectly well, terrible names like “earnest” (quite the worst insult wouldn’t you agree?) and “smug” and occasionally even, “stupid”, just because they dare to disagree with me. Book club makes me mean. And petulant. And spoilt.

4) While I clearly can’t shut up, I also suffer from the kind of nerves I used to experience at school. I worry. I panic about being told off by someone earnest. I get scared in case my bad behavior is noted in the book club minutes and I find myself ostracised by the good Mummies of Aughton. (Tis a social minefield is the bookclub). I start talking and I can’t stop and there is sweat running down my cleavage and I want to grab Siobhans hand for moral support but mine is too clammy and anyway a person doesn’t have to be looking at a room full of persons when a person is on a roll so on and on I verbally gallop, dying inside and completely unable to draw a line under my literary outrage and the constant urge to draw attention away from my literary ineptitude by declaring myself class bimbo and regaling the group with the latest antics in my shoddy romantic history.

You see? You see why I dread the whole matter? This month we are “enjoying” The Girl With The Dragon Tattoo and I, Miss Alison May, want to shoot myself because I dread to think what kind of appalled behavior I will demonstrate at Kaths on friday when we gather around her lovely big farmhouse table to discuss said book and admire her kitchen. I hate the book. I hate it, I hate it, I hate it.

Hell I’m a brat. But never mind, because we do have such a lovely time at book club and I now know a few choice Swedish words courtesy of the late Stieg Larsson, so it can’t be all bad now can it?

Enemies At The School Gates