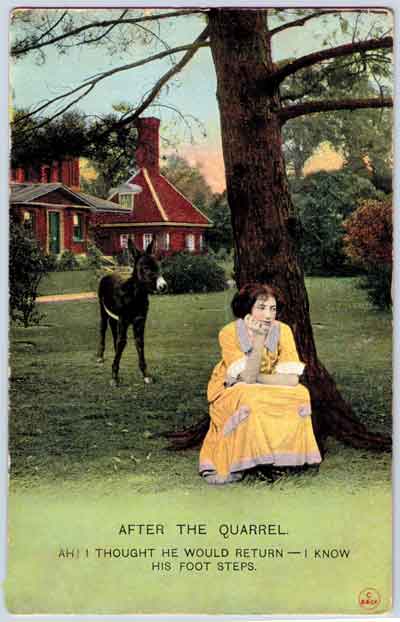 Oh my dear lovely friends I hardly know where to begin. I have hesitated to write this because it seems to me that once you have committed something to paper  then it becomes  true, and more than anything else I  do not want  what I am about to  tell  you to be true.

Nine days ago,  Mark packed his things into three bin bags and moved to his Dads. He has left us. Not because he doesn’t love us, nor because he loves someone else, but because he feels like screaming. Well God Damn it Mark, don’t we all??

I don’t know how to explain this to you, mostly because I hardly know how to explain it to myself. One day he was here, the father of my babba and the person I love more than any other. And the next day he was gone, declaring his intention to clear his head and have some space away from the obligations of family life so he can concentrate on his excessively demanding job and find the time to think straight…

I know. The downright bloody cheek of it. And God knows it raises all the tired old arguments about how easy it is for men to abandon their lives, their responsibilities, and their children. I know all of it. And yes, everyone I know is up in arms about the sheer selfishness of what he has done and I have endured more “All men are bastards” conversations to last me a lifetime this week, but in the midst of all the anger, the disappointment and the hurt on my behalf, is me. Sitting in my ludicrously tidy house (turns out it is Mark who makes all the mess!), just wanting my friend to come home and hardly recognising this stranger everyone else is ranting about.

Here’s the thing: You can never really  know  what goes on in other peoples relationships.  You can issue  all the advice you want in a crisis –  Lock the doors and throw away the key. Don’t let him see the baby. Ignore him and he’ll soon come running back–  and in the end none of it matters . Because nobody else knows  you. Or him.  Yes it is strange that we have sat down and had a cup of everyday since he moved out. And that somehow I cannot work up the will to scream at him. But this is us. This is our way of getting through a catastrophe we want to work out, yet have no point of reference for…

Am I angry? Yes.  I am angry because I have spent two and a half years making sure that every minute of every one of Finley’s days have been as secure as I could make them and in one week I feel that Mark has compromised that certainty. So yes I am downright bloody angry. But do I think he is a  bastard? Not for a minute. I think he is fragile and silly and weak. I think that he is learning his  own mind. That he has a job that challenges  him more than he ever expected and that he is sick of living in my shadow. I think that to a degree we thwart each other. That our roots have become so entwined that we are strangling each other. I think our lives have become a vicious circle one of us had to break so that we could start again.  With or without each other.

And I also think that everything that has gone before this has been the whisper of what was to come. My whining, infections, and subdued hysteria have been the result of denying what lay beneath the careful manufacture of our lives. I didn’t see it coming and yet expectation pulsed through my veins till I  may as well have been stood in concrete, so difficult was it to get through my life, covering my constant fear of the unknown with the security of interminable positivity and the routine of days that are all that I know.

So how am I doing? Housekeepers I am brittle.  At once bereft and yet sharply focused on getting throught the days with as much dignity as I can muster. I am tired. The baby seems fine until the middle of the night, when he cries his heart out for his Daddy, and I drag myself exhausted into his room and try to chase away the monsters without the secret weapons all Daddys’ possess in such situations. So I am tired. But I do not cry. Not until I have to tell someone else that Mark has gone. Or until I see him walking out the door all over again. So I clean and polish and tidy and wash and iron. Letting the house heal my pain and sitting alone at night, so proud of myself I can barely breathe.

The worst of it is that I feel like a fraud. As if I have weaved a web of lies about my life. But I haven’t. Every word of what has gone before is true. Which suggests I suppose that I was decieving myself: not in itself a great crime, but one that does not necessarily apply to me. I have spent ten years practising authenticity and gratitude, and yet it is Mark’s absolute lack of both qualities that is in fact his undoing. I can’t help him deal with his own insecurities anymore and I no longer want to drown in his constant desire to his glass half empty, excusing him and cheering him on with no reward.

So what now? I don’t know. It is almost certain that it isn’t over. Not in the blink of an eye after fifteen years. I know him. I see the uncertainty in his eyes. I know that he knows that he has overstepped the mark and I know that he is struggling to face coming back without compromising this new person he is becoming. But I also know that any man who walks out on his gorgeous two year old little boy without fighting to save a relationship  that defines him isn’t worth having, and above  all  else I know that  I am strong. That no man is worth the tears of a beautiful woman and that one day when I feel a little less ugly than I  do today, I will embrace that.

Hold my hand and we will see what happens.

« Back To Life.
Scrumptious HouseKeeping. »

Get The Tiny Joy Kit Delivered Every Friday

Our wildflowers have tipped from wild to raucous a

Well that’s what I want to believe anyway. Most

Another wonderful present from my sister... #booke

After an evening in the garden... #fromthegarden

Lunchtime has become my new favorite hour of the d

For me, this little bowl of Savon de Marseille soa

A lovely day in the garden celebrated with a gin a